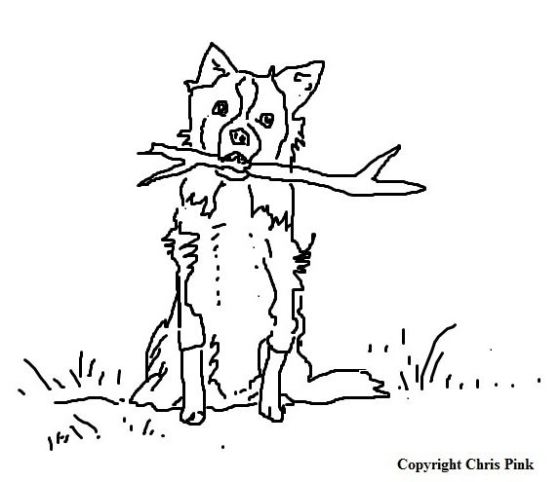 Yesterday I saw a dog in a park carrying a stick – I think it was a Border Collie. Or attempting to carry a stick. The stick was as long as the dog was – assuming the mind-set of a dog for a moment, my guess is that this was probably the main attraction – and the dog was an old boy with a big shaggy coat. As soon as I saw him slowly approach the stick with his curious eyes and lovely colouring, I was confident that he was going to be enamoured by everything it had to offer. Another possible attraction of the stick may well have been its multi-faceted appearance. With an appealing smooth-yet-intriguing texture on the teeth and additional smaller sticks literally branching off from the main one, this particular nice stick, stranded in the greenery of the park and just begging to be picked-up, clearly had a lot to offer. Additionally, the stick was the only discernible object in the entire grassy field, which, surely, qualified as reason enough alone.

Here is how watching dogs interacting with sticks will substantially improve your life.

As I believe I have just sufficiently demonstrated, watching dogs – young or old, age irrelevant – interact with sticks is a joyous activity for humans of all ages and dispositions. Some dogs simply carry sticks about, making humans smile almost by default (unless those humans are cold and dead inside like people who find no pleasure at all in films like Dirty Dancing, but we won’t bother ourselves with that here). Whatever a dog is doing with a stick, be it simply carrying it or trying to attack it, watching such activity makes for immense enjoyment and pleasure.

Facial muscles require a regular workout. Don’t ask me why – let us simply assume that it’s better to smile than to not, and that all those freelance writers who have written copious web articles on the subject over the years had a real interest and were not just following the incredible trail of money which writing for a living so obviously brings.

Here comes the science part. Smiling induces movement in other parts of the body. Hence the fact that when you smile, you generally tend to be interacting in some way which also works other parts of the body, thus making you fitter in a subconscious, holy-shit-I’ve-just-lost-2-pounds-and-all-I-did-was-watch-a-dog-playing way. It is therefore possible to say that watching dogs messing about with sticks is physically good for you, even if you find absolutely no mental stimulation in such an activity and still resent me quite a bit for mentioning Dirty Dancing in the above paragraph.

Scientists reckon that laughter can be used as an effective pain medicine. Wow. psychologists believe, and have strong evidence for, the notion that laughter helps people to bond and engage in meaningful relationships with one another. No way! Another direct consequence of laughter is the inevitable release of endorphins, which we all quite love. So watching dogs interacting with sticks is beneficial in a breathtaking number of ways. Not to mention the fact that watching dogs carrying and playing with sticks does other things besides…

It gets the brain working

Watch a dog obsessing over a stick and you can’t help but think. Try it out and see what I mean. Take this example, in the mind of a woman whose a bit fed-up with her husband: look at what she’s doing with that stick! That’s ingenious, dogs are clever, I wish Dave was more ingenious…which reminds me…he really needs to Google how to fix the cupboard door like he bloody told me he would…maybe I should consider divorce after all…

While it could well be said that dogs carrying sticks is, in evolutionary terms, creating a disenchanting culture of misery for couples – specifically those with DIY shortcomings which could have been avoided had one followed gut instinct when a light-bulb needed changing and the partner in question was seriously flummoxed in a way that should really have made one think long and hard about the future of that relationship – it could also be said that it makes you think and have ideas. And if you have ideas, that’s brilliant, isn’t it?

All because dogs just quite like carrying sticks around. There. Thank you, dogs, and thank you for being there, sticks.